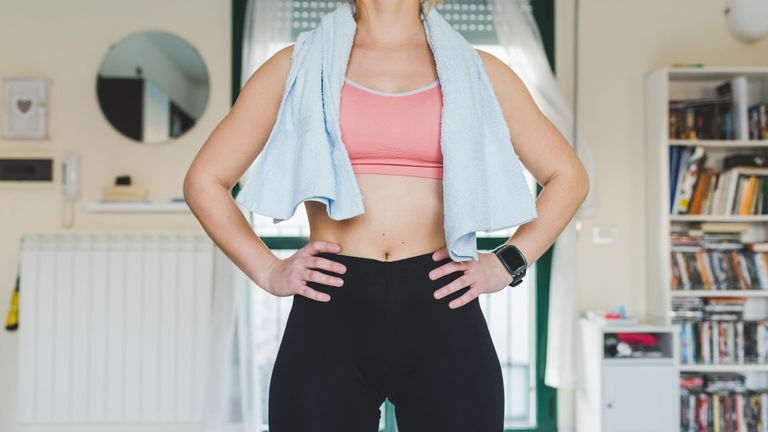 When it comes to choosing sportswear, most of us look for a supportive sports bra, fast-drying fabrics and leggings that can withstand stretching, running, cycling and more.

However, it’s fair to say the type of underwear we are wearing beneath all the sports gear is somewhat of an afterthought.

After all, it’s not like we chuck a pair of underwear into our gym bags - most of us simply wear the ones we’ve had on for the day if we are heading to a gym or workout class.

But, it seems we should be paying a lot more attention to what we are wearing down there, when we are working out. Vaginas are prone to getting all kinds of infections when they get hot and sweaty - both of which are incredibly likely when exercising. It’s therefore important that we let our vaginas breathe during an intense workout session - and that could mean forgoing underwear all together.

Dr Lucy Glancey, a genital cosmetic surgeon, says: “When working out, you need to think about wearing underwear that allows your vagina to breathe. Anything too tight can lead to a build up of sweat and moisture which can result in yeast infections and a PH imbalance.

“When working out, the naturally-producing bacteria around the vagina area multiplies due to how much you’re sweating and, of course, this isn’t helped by tight underwear. Having a bacterial yeast infection caused by this isn’t pleasant but is very common.”

Lucy also explains that a UTI can be a common occurrence from wearing the wrong underwear in the gym.

She adds: “Getting a urine infection is another common problem from women wearing too tight underwear when working out, this is due to bacteria being able to travel easier into our bladders.”

It seems cheaper materials like lycra and nylon are the most common culprits for causing these issues. An easy way to get around this is to simply not wear any underwear at all. In fact, experts actually recommend doing so!

Consultant gynaecologist Dr Tania Adib says: “If you're wearing breathable gym pants, you might be much more comfortable with no underwear at all.”

Dr Lucy agrees that ditching your undies could be beneficial. She adds: “Unfortunately wearing lycra and nylon will trap moisture which is then a breeding ground for vaginal infections, so if you’re someone who is prone to infections, aim to wear workout gear is made from cotton and isn’t overly tight - or ditch the underwear altogether if you’re comfortable in doing, allowing your vagina to breathe in the process.

“It’s great to give our nether regions a chance to breathe ‘freely’ and feel less restricted without a piece of material trapping the nasties in. Depending on the exercise you are doing, underwear can also cause chaffing which can become sore and infected too. So, going commando in the gym is healthier for the vagina than wearing tight underwear or thongs.”

But, for those not comfortable going commando, certain underwear is still fine to wear - just bear a few things in mind.

Dr Tania says: "You should avoid underwear like thongs that can get pushed up and cause discomfort. The sweat generated during a workout will create a warm, moist environment, which can encourage bacteria and increase the chance of bacterial vaginosis or thrush. Any fabrics should be breathable so the moisture is soaked up.”

What’s more, Dr Lucy explains that thongs can introduce E. coli from the bottom into the vagina, which can also lead to vaginal and urine infections.

As a result, wearing larger kickers or briefs is advised over than skimpier ones - there’s no doubt they will be more comfortable during an active session, too.

Those who do decide to take the plunge and go knicker-free should also be wary of lycra gym gear.

Dr Lucy says, “Lycra around the vagina will also cause the same problems as the underwear. If you suffer from continual vagina infections, switch up the material you’re wearing opting for cotton or breathable fabric which won’t be so restrictive around the crotch area. There’s also workout gear with a built in cotton gusset which will help to keep the moisture away.”