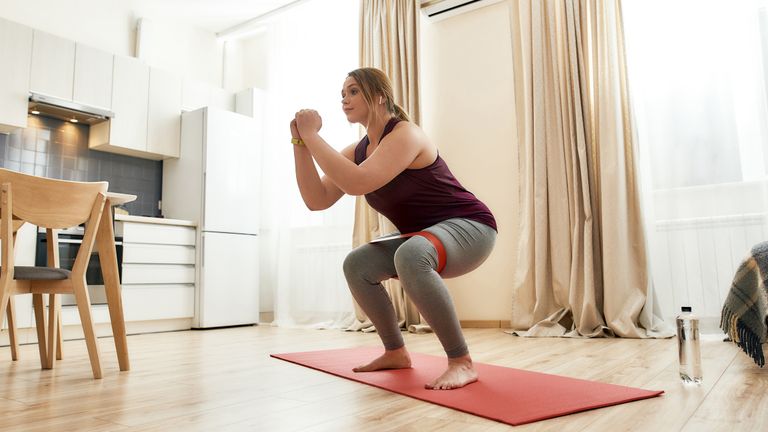 Looking for resistance bands exercises? When it comes to a full body workout, they may not always come to mind, but these stretchy pieces of elastic pack a serious fitness punch.

Jack Claxon, personal trainer at UK David Lloyd Clubs explains that they're so versatile you can use them all over the body. Resistance bands vary in size, width and length and to get the most from the exercises, it’s important to use the right band for each move.

“Power bands are big and thick, used for compound exercises for the lower body (such as squats and deadlifts),” says Jack.

“Tube bands (with handles), often mimic gym machines and are good for the upper body whilst wider therapy bands are good for rehabilitation; physios use these a lot.”

There are also mini bands, which are smaller. These can be used to activate smaller muscles - often muscles you didn’t even realise you had!

You can get a full body resistance band workout from the comfort of your own home using these expert-approved moves. Aim for eight to 12 reps of each move, and try to do each exercise three to four times.

Resistance bands are great for working all areas of your arms.

To tone up your shoulders, try an Upright Row.

“Hold the power band overhand with a gap between both hands. Pull elbows up towards the ceiling keeping the hands close to the body to work the shoulders and into the upper back. Slowly release back down.”

Ready for your next move?

“Either stand in the middle or loop around a stable anchor point down low. Keep the elbows tight to the ribs (narrow) and bend your arms to bring the hands up towards the shoulders and squeeze the bicep. Release slow and controlled,” explains Jack.

Wood Chops are a great exercise for the core.

“Attach a power band to a stable anchor point in line with your sternum (the long, flat bone in the middle of your chest),” says Jack.

“Facing sideways on the band, take hold and side-step out so there is tension in the band. Pull the band across the body (arms straightened) and brace your core as you do so. Keeping the head and hips facing forward as best as possible. Afterwards face the other direction and repeat.”

Resistance band exercises for chest and back

“Use a band with handles to loop round a stable anchor point in line with your sternum. Take hold of the handles and face away from the anchor point. Take two to three steps in front of you and bring the band around the body, bringing hand to hand and squeezing the chest together,” explains Jack.

Next, release slowly, keeping the shoulder blades down and the neck retracted. Don’t release too far, and then go hands together again, squeezing the chest all the way through.

For a back workout, try a Bent Over Row.

“Stand in the middle of a handled resistance band in the middle. You want to hinge your hips backwards in a deadlift-like movement, retracting your shoulder blades and keeping your core engaged,” explains Jack.

“Pull the handles back and up towards the ceiling (palms want to be facing inwards) keeping the elbows narrow and squeeze your shoulder blades together. Keep the tension in the shoulder blades as you release the band and ensure you’re strictly staying in the same position.”

Tone up your outer thighs with Side Lying Leg Lifts.

Lie on your side, propped up on your elbow, legs and feet stacked, one on top of the other. Wrap a small, thick band just above your ankles, and slowly lift the upper leg till the band is super taut. Hold, then slowly release.

Make your squat harder by placing a small, thick resistance band just above the knees. Step out so there’s full resistance in your band. Squat down, hold the low squat for 5 seconds, then push through the heels to rise. Feel that burn!