My Imperfect Life is supported by its audience. When you purchase through links on our site, we may earn an affiliate commission. Here’s why you can trust us 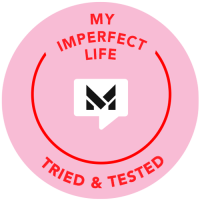 If you're curious about the Lovense Lush 2, you'll be pleased to hear our adventurous side loves the upgrade of the original toy in our tried-and-tested Lovense Lush 2 review. (Yes, we personally put in the time evaluating this baby, because we're nothing if not givers!)

The latter allows your partner to choose how much and what type of vibration you’re getting from your toy from up to 30 feet via Bluetooth or from anywhere in the world over the internet. Vibrations come from the larger end of the curved toy, which can be inserted into the vagina to apply some much-appreciated pressure to the G-spot.

"Lovense is the only toy in the market that makes virtual sex nearly close to the real sex," co-founder and CEO Dan Liu told Tech.co (opens in new tab).

You can buy the Lovense Lush 2 on Amazon or directly from the Lovense website, which often has good deals on its sex toys, so make sure to keep an eye out! Here are all of the must-know details—positive and negative—of the Lovense Lush 2 model, per our writer's thorough review.

Lovense Lush 2 review: Everything you need to know

The Lovense Lush 2 is a C-shaped toy with one bulbous end (where the motor is located) that is inserted into the vagina, and one thinner end or "antenna" that sits externally.

The downside of this vibrator’s design is that the antenna doesn’t provide any clitoral stimulation, which means if you require that to climax then you’ll have to stimulate your clitoris yourself. Or just use the toy externally—but then your G-spot might get jealous!

While we know some types of vibrators have so many different buttons to contend with that you feel more like you’re trying to control the Starship Enterprise than a sex toy, we were pleased to find that the Lush 2 has just one (located on its antenna) and it pretty much does everything. To turn on or pair the device, you simply hold down the button for 3 to 5 seconds until the red light flashes; push it once to move between vibration patterns. That’s it. An orgasm never felt so easy.

It takes about 70 minutes to charge fully and you can tell it’s charging when the red indicator light is lit up. Make sure you don’t use it while it’s fueling up, though—Lovense warns against it and where the safety of our vag is concerned, we listen!

Like our other beloved toy, the Lovense Nora, the Lush 2 has seven different vibration modes that all pack a punch—even the "weaker" ones. You can easily cycle through low, medium, high, pulse, wave, fireworks and earthquake (yep, it’s as good as it sounds) by pressing the button on the antenna.

This entails covering it in water-based lube before insertion, cleaning it with water and mild soap or sex toy cleaner before and after every use, drying it thoroughly and then storing it in a bag or the box it came in. You know what they say: with great power comes great responsibility.

For the Lovense Lush 2, review the brand's recommendations that you recharge your toy at least once every six months to keep it in working order. If you’re anything like us, though, that won’t be a problem—you’ll have to charge it a heck of a lot more than that.

With the Lush 2 being a wearable device, this function particularly lends itself to being used for discreet public play. You can sit opposite your partner in a restaurant, for example, enjoying secret pulsations in your pants while they relish having power over your pleasure.

If that seems a bit too adventurous, though, you and your partner can play with the app from the comfort of your own homes. Along with two different control panels, it also offers countless pre-programmed vibration patterns created by anonymous users, the opportunity to create your own patterns, a chat function for serious sexting and a video call mode too. You can even sync your toy to music or it can be sound activated.

While some app-controlled vibrators can suffer from a poor Bluetooth connection, we didn’t have any issues when using the Lush 2 and the Lovense Remote app, even under clothes or while in the bath.

SHOULD YOU BUY IT?

Victoria is a freelance journalist with eight years of experience, writing everything from reviews and news pieces to meaty features for various online and print titles — including easyJet Traveller and b.inspired. Her work covers travel, lifestyle, health, and fitness. In her spare time, Victoria performs improv comedy and she’s currently training to be a PT.